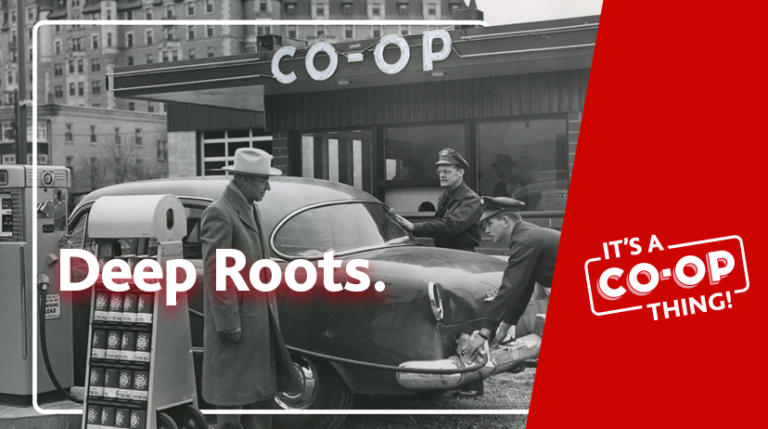 In the early part of 1922, the townspeople of Armstrong and Spallumcheen felt the need of a co-operative society and after much effort on the part of Mr. Robert Wood and several other interested parties, a meeting was called and it was decided to proceed with the formation of this society.

The Armstrong Co-operative Association received their papers of incorporation on February 11th, 1922. They had arranged to take over the grocery department of the Foreman and Armstrong store. The business was officially opened on March 3rd, 1922 and soon after the Association purchased the building. The board of directors consisted of Messrs: Willis Hunter, James McCallan, J.H. Austin, R. Wood, H.D. Childs, W.T. Hayhurst.

A subscription list for shares was compiled and the Association was successful in collecting $2300.00. The grocery clerks in this, the first Co-op Store in Armstrong were F.L. Sugden and A. Marshall, with some weekend help. It appears that in approximately ten years after the Co-op took over the operation of Foreman and Armstrong’s grocery dept, the association purchased the building. Adjourning property on the west side was purchased later on followed by the purchase of the parking lot to the North, which at the time was used as a hitching rail for horses.

Country grocery stores of the day were unlike the groceterias of today; the clerks would take down the orders from the customers and then dart all over the store to pick up what was required. Coal oil for the lamps and lanterns was taken from barrels. Sacks of bran, shorts, and flour all were in large sacks. The clerks also had to negotiate with the customers for the eggs and butter that at times were used in trade.

In the 1930’s it was difficult to carry on a credit business on account of lack of purchasing power. Edgar Docksteader, a charter member of the Co-op Association, has provided the information that you read on this page. He mentioned some of the names who assisted the Association in it’s activites – such as Frank Harrison, H. Mckeen, Bob Spearman,
Foster Whittaker.

In the early years of the Co-op – W.F. Youngblood was men’s wear manager and W. Winkles was in charge of shoes etc. During the late 1920’s, on request of members in Salmon Valley, a branch store was operated at the Heywood’s corner for a few years, with H.W. Pritchard in charge; also a branch at Falkland under the supervision of W. Taylor. These branches were eventually closed and H.W. Pritchard took charge of the books at Armstrong. Armstrong Block Holdings was formed to raise money in the debentures, for the purchase of property during these formative years. The debentures for this property were purchased by those members who could do so.

After World War II it was decided that new premises were required, as by this time the groceteria style of merchandising goods was being used. The properties to the west of the main buildind were torn down and a reinforced concrete building was erected. Stock for this new store was moved in January 1950. Official opening of the store took place on Jan 6th. The fully modern, new store, was in operation for only thirty-six days when it was razed by a Â spectacular fire on a saturday morning Feb 11th, 1950. A bowling alley was being installed in the basement at that time and the workmen made their escape by the west side entrance. The fire was caused from gases from the damp coal that was stored in the building for heating purposes.

The directors and a number of members proposed that business should carry on until a new building could be erected. The old sample rooms at the hotel were used until January 1951 when again stock and fixtures were ready in the rebuilt store. Some years later a warehouse was built on the N.E. Corner and in the 1960’s the building was extended to its present size.

Throughout the years the co-op has paid out many thousands of dollars in patronage refunds to it’s members.

The above information was supplied by Mr. Edgar Docksteader to the 1979 Board of Directors.